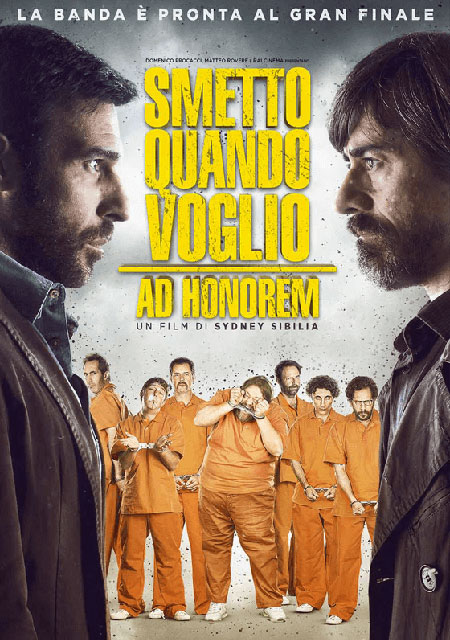 “Sopox is the formula for nerve gas. That’s what he needed a chromatograph for. This madman started synthesizing nerve gas” Thus the beginning of the final chapter of the Smetto Quando Voglio saga. Pietro Zinni (Edoardo Leo) is in jail and the whole gang is with him. But they can’t stay there for long because Walter Mercurio (Luigi Lo Cascio) is out there and he’s ready to make a massacre and only the best minds around can stop him. But who is Walter Mercurio? What is he hiding? What is his plan? The Gang comes together for the last time to face the baddest villain ever. But they can’t do it on their own, this time they will need the help of their historical enemy, Moray (Neri Marcorè). With him, they will have to escape from Rebibbia to anticipate Mercury’s moves, trying to figure out how to neutralize the attack he is setting up, an event in which hundreds of people will participate. Smetto Quando Voglio – Ad Honorem looks to be explosive, with an epic, grand finale that will close the circle of the entire trilogy. Every saga has an ending.” The third and final chapter of the saga directed by Sydney Sibilia.